So you want to easily test the code you’re writing? The following recipes cover how to write automated tests and see their code coverage. We also give pointers to plug those in modern continuous integration services like Travis CI and Coveralls.

We will use an established and well-designed regression testing framework called Prove. It is not the only possibility though, FiveAM is a popular one (see this blogpost for an introduction) and there are others (and more again). We prefer Prove for its documentation and its extensible reporters (it has different report styles and we can extend them).

warning: Prove has a couple limitations and will soon be obsolete. We advise to start with another test framework, such as FiveAM.

Prove is in Quicklisp:

This command installs prove if necessary, and loads it.

You can directly run one test by compiling it. With Slime, use the usual C-c C-c.

Common Lisp is interactive by nature (or so are most implementations), and testing frameworks make use of it. It is possible to ask the framework to open the debugger on a failing test, so that we can inspect the stack trace and go to the erroneous line instantly, fix it and re-run the test from where it left off, by choosing the suggested restart.

With Prove, set prove:*debug-on-error* to t.

Below is a short screencast showing all this in action (with FiveAM):

Note that in the debugger:

A code coverage tool produces a visual output that allows to see what parts of our code were tested or not:

Such capabilities are included into Lisp implementations. For example, SBCL has the sb-cover module and the feature is also built-in in CCL or LispWorks.

Coverage reports are only generated for code compiled using compile-file with the value of the sb-cover:store-coverage-data optimization quality set to 3.

You can open your browser at ../yourproject/t/coverage/cover-index.html to see the report like the capture above or like this code coverage of cl-ppcre.

Continuous Integration is important to run automatic tests after a commit or before a pull request, to run code quality checks, to build and distribute your software… well, to automate everything about software.

We want our programs to be portable across Lisp implementations, so we’ll set up our CI pipeline to run our tests against several of them (it could be SBCL and CCL of course, but while we’re at it ABCL, ECL and possibly more).

We have a choice of Continuous Integration services: Travis CI, Circle, Gitlab CI, now also GitHub Actions, etc (many existed before GitHub Actions, if you wonder). We’ll have a look at how to configure a CI pipeline for Common Lisp, and we’ll focus a little more on Gitlab CI on the last part.

We’ll also quickly show how to publish coverage reports to the Coveralls service. cl-coveralls helps to post our coverage to the service.

We’ll use CI-Utils, a set of utilities that comes with many examples. It also explains more precisely what is a CI system and compares a dozen of services.

It relies on Roswell to install the Lisp implementations and to run the tests. They all are installed with a bash one-liner:

(note that on the Gitlab CI example, we use a ready-to-use Docker image that contains them all)

It also ships with a test runner for FiveAM, which eases some rough parts (like returning the right error code to the terminal). We install ci-utils with Roswell, and we get the run-fiveam executable.

Then we can run our tests:

Following is the complete .travis.yml file.

The first part should be self-explanatory:

This is how we configure the implementations matrix, to run our tests on several Lisp implementations. We also send the test coverage made with SBCL to Coveralls.

Some jobs can be marked as allowed to fail:

We finally install Roswell, the implementations, and we run our tests.

Below with Gitlab CI, we’ll use a Docker image that already contains the Lisp binaries and every Debian package required to build Quicklisp libraries.

Gitlab CI is part of Gitlab and is available on Gitlab.com, for public and private repositories. Let’s see straight away a simple .gitlab-ci.yml:

Gitlab CI is based on Docker. With image we tell it to use the latest tag of the clfoundation/sbcl image. This includes the latest version of SBCL, many OS packages useful for CI purposes, and a script to install Quicklisp. Gitlab will load the image, clone our project and put us at the project root with administrative rights to run the rest of the commands.

test is a “job” we define, script is a recognized keywords that takes a list of commands to run.

Suppose we must install dependencies before running our tests: before_script will run before each job. Here we install Quicklisp (adding it to SBCL’s init file), and clone a library where Quicklisp can find it.

We can try locally ourselves. If we already installed Docker and started its daemon (sudo service docker start), we can do:

This will download the lisp image (±300MB compressed), mount some local code in the image where indicated, and drop us in bash. Now we can try a make test.

Here is a more complete example that tests against several CL implementations in parallel:

Here we defined two stages (see environments), “test” and “build”, defined to run one after another. A “build” stage will start only if the “test” one succeeds.

“build” is asked to run only when a new tag is pushed, not at every commit. When it succeeds, it will make the files listed in artifacts’s paths available for download. We can download them from Gitlab’s Pipelines UI, or with an url. This one will download the file “some-file-name” from the latest “build” job:

When the pipelines pass, you will see: 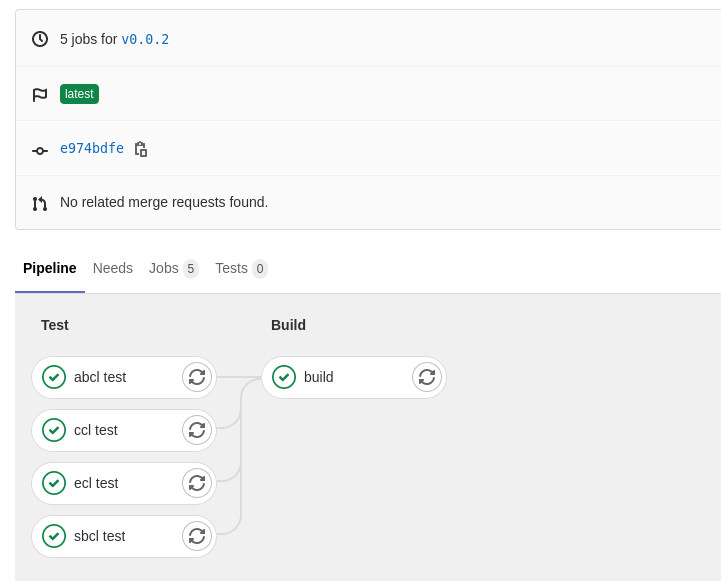 You now have a ready to use Gitlab CI.