📹 NEW! Learn Lisp in videos and support our contributors with this 40% discount.

LispWorks is a Common Lisp implementation that comes with its own Integrated Development Environment (IDE) and its share of unique features, such as the CAPI GUI toolkit. It is proprietary and provides a free limited version.

Here, we will mainly explore its IDE, asking ourselves what it can offer to a seasoned lisper used to Emacs and Slime. The short answer is: more graphical tools, such as an easy to use graphical stepper, a tracer, a code coverage browser or again a class browser. Setting and using breakpoints was easier than on Slime.

LispWorks also provides more integrated tools (the Process browser lists all processes running in the Lisp image and we can stop, break or debug them) and presents many information in the form of graphs (for example, a graph of function calls or a graph of all the created windows).

We can see a matrix of LispWorks features by edition and platform here: http://www.lispworks.com/products/features.html.

And, of course, a built-in IDE.

LispWorks is used in diverse areas of the industry. They maintain a list of success stories. As for software that we can use ourselves, we find ScoreCloud amazing (a music notation software: you play an instrument, sing or whistle and it writes the music) or OpenMusic (opensource composition environment).

The limitations are the following:

What does it prevent us to do? As an illustration, we can not load this set of libraries together in the same image:

For the record, the snippet provided by Quicklisp to put in one’s startup file is the following:

You’ll have to paste it to the listener window (with the C-y key, y as “yank”).

LispWorks actually comes in four paid editions. It’s all explained by themselves here: http://www.lispworks.com/products/lispworks.html. In short, there is:

At the time of writing, the licence of the hobbyist edition costs 750 USD, the pro version the double. They are bought for a LW version, per platform. They have no limit of time.

NB: Please double check their upstream resources and don't hesitate to contact them.

The LispWorks IDE is self-contained, but it is also possible to use LispWorks-the-implementation from Emacs and Slime (see below). The IDE runs inside the Common Lisp image, unlike Emacs which is an external program that communicates with the Lisp image through Swank and Slime. User code runs in the same process.

We personally found the editing experience a bit “raw”. For example:

We also had an issue, in that the go-to-source function bound to M-. did not work out for built-in Lisp symbols. Apparently, LispWorks doesn’t provide much source code, and mostly code of the editor. Some other commercial Lisps, like Allegro CL, provide more source code

The editor provides an interesting tab: Changed Definitions. It lists the functions and methods that were redefined since, at our choosing: the first edit of the session, the last save, the last compile.

Most of the keybindings are similar to Emacs, but not all. Here are some differences:

Some useful functions don’t have a keybinding by default, for example:

It is possible to use classical keybindings, à la KDE/Gnome. Go to the Preferences menu, Environment and in the Emulation tab.

There is no Vim layer.

It is possible to search for a keybinding associated to a function, or a function name from its keybinding, with the menu (Help -> Editing -> Key to Command / Command to Key) or with C-h followed by a key, as in Emacs. For example type C-h k then enter a keybinding to get the command name. See more with C-h ?.

It is possible to change keybindings. The editor’s state is accessible from the editor package, and the editor is built with the CAPI framework, so we can use the capi interface too. Useful functions include:

Here’s how you can bind keys:

Here’s how to define a new command. We make the ) key to go past the next closing parenthesis.

And here’s how you can change indentation for special forms:

The listener is the REPL we are expecting to find, but it has a slight difference from Slime.

It doesn’t evaluate the input line by line or form by form, instead it parses the input while typing. So we get some errors instantly. For example, we type (abc. So far so good. Once we type a colon to get (abc:, an error message is printed just above our input:

Indeed, now abc: references a package, but such a package doesn’t exist.

Its interactive debugger is primarily textual but you can also interact with it with graphical elements. For example, you can use the Abort button of the menu bar, which brings you back to the top level. You can invoke the graphical debugger to see the stacktraces and interact with them. See the Debugger button at the very end of the toolbar. 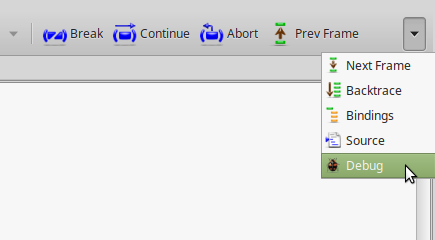 If you see the name of your function in the stacktraces (you will if you wrote and compiled your code in a file, and not directly wrote it in the REPL), you can double-click on its name to go back to the editor and have it highlight the part of your code that triggered the error.

NB: this is equivalent of pressing M-v in Slime.

It is possible to choose the graphical debugger to appear by default, instead of the textual one.

The listener provides some helper commands, not unlike Slime’s ones starting with a comma ,:

The stepper is one of the areas where LispWorks shines.

When your are writing code in the editor window, you can set breakpoints with the big red “Breakpoint” button (or by calling M-x Stepper Breakpoint). This puts a red mark in your code.

The next time your code is executed, you’ll get a comprehensive Stepper pop-up window showing:

That’s not all. The non-visual, REPL-oriented stepper is also nice. It shows the forms that are being evaluated and their results.

In this example, we use :s to “step” though the current form and its subforms. We are using the usual listener, we can write any Lisp code after the prompt (the little ` -> ` here), and we have access to the local variables (X).

The class browser allows us to examine a class’s slots, parent classes, available methods, and some more. 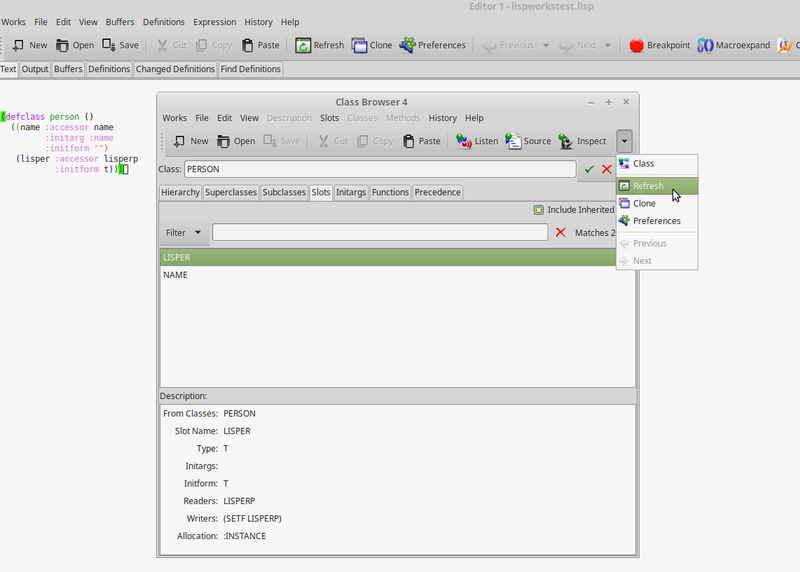 It is composed of several panes:

The Functions pane lists all methods applicable to that class, so we can discover public methods provided by the CLOS object system: initialize-instance, print-object, shared-initialize, etc. We can double-click on them to go to their source. We can choose not to include the inherited methods too (see the “include inherited” checkbox).

You’ll find buttons on the toolbar (for example, Inspect a generic function) and more actions on the Methods menu, such as a way to see the functions calls, a menu to undefine or trace a function.

The function call browser allows us to see a graph of the callers and the callees of a function. It provides several ways to filter the displayed information and to further inspect the call stack.

After loading a couple packages, here’s a simple example showing who calls the string-trim function. 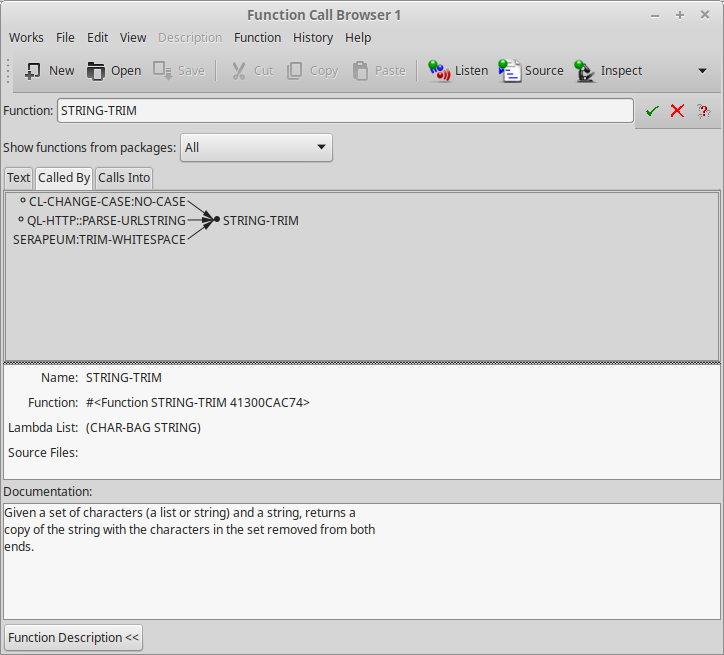 It shows functions from all packages, but there is a select box to restrict it further, for example to the “current and used” or only to the current packages.

Double click on a function shown in the graph to go to its source. Again, as in many LispWorks views, the Function menu allows to further manipulate selected functions: trace, undefine, listen (paste the object to the Listener)…

The Text tab shows the same information, but textually, the callers and callees side by side.

We can see cross references for compiled code, and we must ensure the feature is on. When we compile code, LispWorks shows a compilation output likes this:

We see that cross referencing is on. Otherwise, activate it with (toggle-source-debugging t).

The Process Browser shows us a list of all threads running. The input area allows to filter by name. It accepts regular expressions. Then we can stop, inspect, listen, break into these processes. 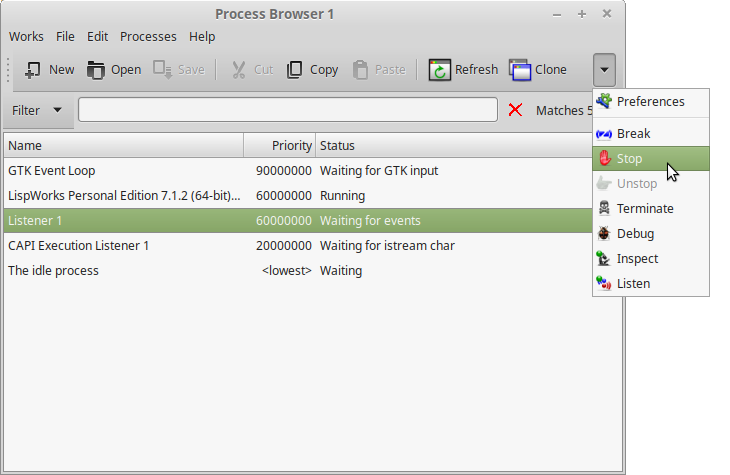 We like the Search Files functionality. It is like a recursive grep, but we get a typical LispWorks graphical window that displays the results, allows to double-click on them and that offers some more actions.

Last but not least, have a look at the compilation conditions browser. LispWorks puts all warnings and errors into a special browser when we compile a system. From now on we can work on fixing them and see them disappear from the browser. That helps keeping track of warnings and errors during development.

Using LispWorks from Emacs and Slime

To do that, you have two possibilities. The first one is to start LispWorks normally, start a Swank server and connect to it from Emacs (Swank is the backend part of Slime).

From Emacs, run M-x slime-connect, choose localhost and 9876 for the port.

You should be connected. Check with: (lisp-implementation-type). You are now able to use LispWorks’ features:

The second possibility is to create a non-GUI LispWorks image, with Swank loaded, and to run this image from SLIME or SLY. For example, to create a so-called console image with multiprocessing enabled:

and run LispWorks like this to create the new image ~/lw-console:

However: console is implemented only for Windows and Mac.