Lisp has a long and rich history and so does the development of Graphical User Interfaces in Lisp. In fact, the first GUI builder was written in Lisp (and sold to Apple. It is now Interface Builder).

Lisp is also famous and unrivalled for its interactive development capabilities, a feature even more worth having to develop GUI applications. Can you imagine compiling one function and seeing your GUI update instantly? We can do this with many GUI frameworks today, even though the details differ from one to another.

Finally, a key part in building software is how to build it and ship it to users. Here also, we can build self-contained binaries, for the three main operating systems, that users can run with a double click.

We aim here to give you the relevant information to help you choose the right GUI framework and to put you on tracks. Don’t hesitate to contribute, to send more examples and to furnish the upstream documentations.

In this recipe, we’ll present the following GUI toolkits:

In addition, you might want to have a look to:

as well as the other ones listed on awesome-cl#gui and Cliki.

Tk (or Tcl/Tk, where Tcl is the programming language) has the infamous reputation of having an outdated look. This is not (so) true anymore since its version 8 of 1997 (!). It is probably better than you think: 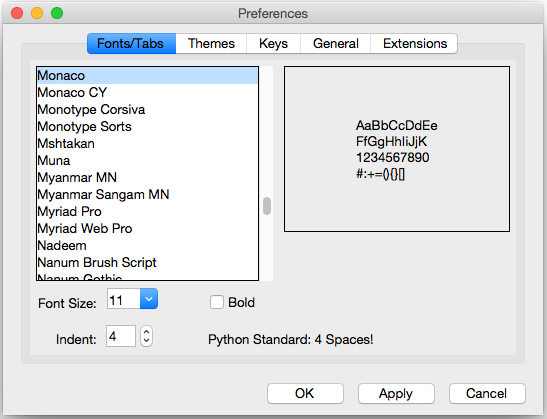 Tk doesn’t have a great choice of widgets, but it has a useful canvas, and it has a couple of unique features: we can develop a graphical interface fully interactively and we can run the GUI remotely from the core app.

So, Tk isn’t fancy, but it is a used and proven GUI toolkit (and programming language) still used in the industry. It can be a great choice to quickly create simple GUIs, to leverage its ease of deployment, or when stability is required.

The Lisp binding is Ltk.

Do we need to present Qt and Qt4? Qt is huge and contains everything and the kitchen sink. Qt not only provides UI widgets, but numerous other layers (networking, D-BUS…).

Qt is free for open-source software, however you’ll want to check the conditions to ship proprietary ones.

The Qtools bindings target Qt4. The Qt5 Lisp bindings are https://github.com/commonqt/commonqt5/ and not ready for prime time..

A companion library for Qtools, that you’ll want to check out once you made your first Qtool application, is Qtools-ui, a collection of useful widgets and pre-made components. It comes with short demonstrations videos.

Gtk+3 is the primary library used to build GNOME applications. Its (currently most advanced) lisp bindings is cl-cffi-gtk. While primarily created for GNU/Linux, Gtk works fine under macOS and can now also be used on Windows.

IUP is a cross-platform GUI toolkit actively developed at the PUC university of Rio de Janeiro, Brazil. It uses native controls: the Windows API for Windows, Gtk3 for GNU/Linux. At the time of writing, it has a Cocoa port in the works (as well as iOS, Android and WASM ones). A particularity of IUP is its small API.

The Lisp bindings are lispnik/iup. They are nicely done in that they are automatically generated from the C sources. They can follow new IUP versions with a minimal work and the required steps are documented. All this gives us good guarantee over the bus factor.

IUP stands as a great solution in between Tk and Gtk or Qt. 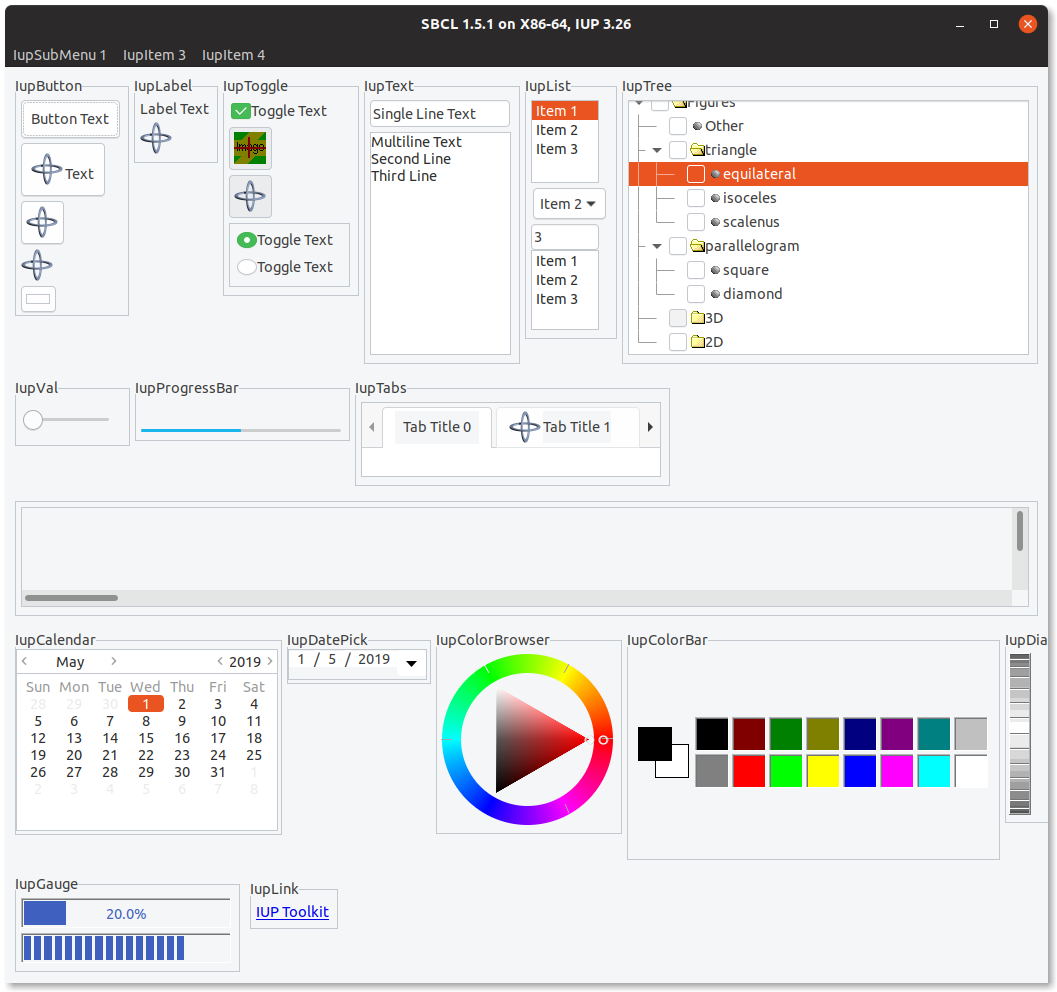 Nuklear is a minimal-state, immediate-mode graphical user interface toolkit written in ANSI C and licensed under public domain. It was designed as a simple embeddable user interface for application and does not have any dependencies, a default render backend or OS window/input handling but instead provides a highly modular, library-based approach, with simple input state for input and draw commands describing primitive shapes as output. So instead of providing a layered library that tries to abstract over a number of platform and render backends, it focuses only on the actual UI.

Unlike traditional UI frameworks, Nuklear allows the developer to take over the rendering loop or the input management. This might require more setup, but it makes Nuklear particularly well suited for games, or for applications where you want to create new controls. 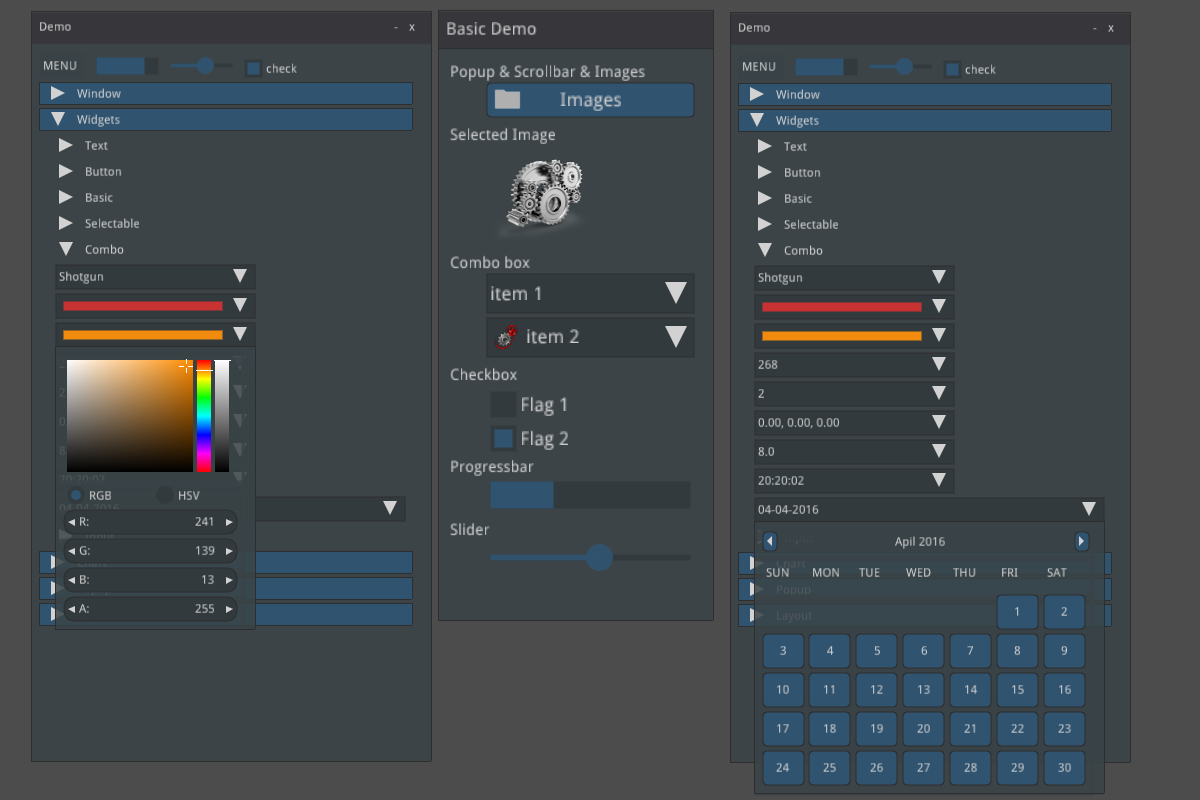 Ltk is quick and easy to grasp.

All widgets are created with a regular make-instance and the widget name:

This makes Ltk explorable with the default symbol completion.

How to start the main loop

As with most bindings, the GUI-related code must be started inside a macro that handles the main loop, here with-ltk:

How to display widgets

After we created some widgets, we must place them on the layout. There are a few Tk systems for that, but the most recent one and the one we should start with is the grid. grid is a function that takes as arguments the widget, its column, its row, and a few optional parameters.

As with any Lisp code in a regular environment, the functions’ signatures are indicated by the editor. It makes Ltk explorable.

Here’s how to display a button:

That’s all there is to it.

Many widgets have a :command argument that accept a lambda which is executed when the widget’s event is started. In the case of a button, that will be on a click:

When we start the Tk process in the background with (start-wish), we can create widgets and place them on the grid interactively.

To try the Nodgui demo, do:

We create our main widget that will contain the rest:

We create an input field and a button inside this main widget:

We stack them horizontally:

and we show them:

That’s cool, but we don’t react to the click event yet.

Reacting to events in Qt happens through signals and slots. Slots are functions that receive or “connect to” signals, and signals are event carriers.

Widgets already send their own signals: for example, a button sends a “pressed” event. So, most of the time, we only need to connect to them.

However, had we extra needs, we can create our own set of signals.

We want to connect our go-button to the pressed and return-pressed events and display a message box.

And voilà. Run it with

We’ll implement the same functionality as above, but for demonstration purposes we’ll create our own signal named name-set to throw when the button is clicked.

We start by defining the signal, which happens inside the main-window, and which is of type string:

We create a first slot to make our button react to the pressed and return-pressed events. But instead of creating the message box here, as above, we send the name-set signal, with the value of our input field..

So far, nobody reacts to name-set. We create a second slot that connects to it, and displays our message. Here again, we precise the parameter type.

It is possible to build a binary and bundle it together with all the necessary shared libraries.

You might also like this Travis CI script to build a self-contained binary for the three OSes.

The documentation is exceptionally good, including for beginners.

The library to quickload is cl-cffi-gtk. It is made of numerous ones, that we have to :use for our package.

As with the other libraries, everything happens inside the main loop wrapper, here with-main-loop.

How to create a window

How to create a widget

All widgets have a corresponding class. We can create them with make-instance 'widget-class, but we preferably use the constructors.

The constructors end with (or contain) “new”:

How to create a layout

then pack a widget onto the box:

and add the box to the window:

and display them all:

Use g-signal-connect + the concerned widget + the event name (as a string) + a lambda, that takes the widget as argument:

Please check the installation instructions upstream. You may need one system dependency on GNU/Linux, and to modify an environment variable on Windows.

We are not going to :use IUP (it is a bad practice generally after all).

The following snippet creates a dialog frame to display a text label.

Important note for SBCL: we currently must trap division-by-zero errors (see advancement on this issue). So, run snippets like so:

As with all the bindings seen so far, widgets are shown inside a with-iup macro, and with a call to iup:main-loop.

The constructor function is the name of the widget: iup:label, iup:dialog.

How to display a widget

You can group widgets on frames, and stack them vertically or horizontally (with vbox or hbox, see the example below).

To allow a widget to be expanded on window resize, use :expand :yes (or :horizontal and :vertical).

Use also the :alignement properties.

How to get and set a widget’s attributes

Use (iup:attribute widget attribute) to get the attribute’s value, and use setf on it to set it.

Most widgets take an :action parameter that takes a lambda function with one parameter (the handle).

Below we create a label and put a button below it. We display a message dialog when we click on the button.

Here’s a similar example to make a counter of clicks. We use a label and its title to hold the count. The title is an integer.

Below we create three list widgets with simple and multiple selection, we set their default value (the pre-selected row) and we place them horizontally side by side.

Disclaimer: as per the author’s words at the time of writing, bodge-ui is in early stages of development and not ready for general use yet. There are some quirks that need to be fixed, which might require some changes in the API.

bodge-ui is not in Quicklisp but in its own Quicklisp distribution. Let’s install it:

Uncomment and evaluate this line only if you want to enable the OpenGL 2 renderer:

We can run the built-in example:

Now let’s define a package to write a simple application. 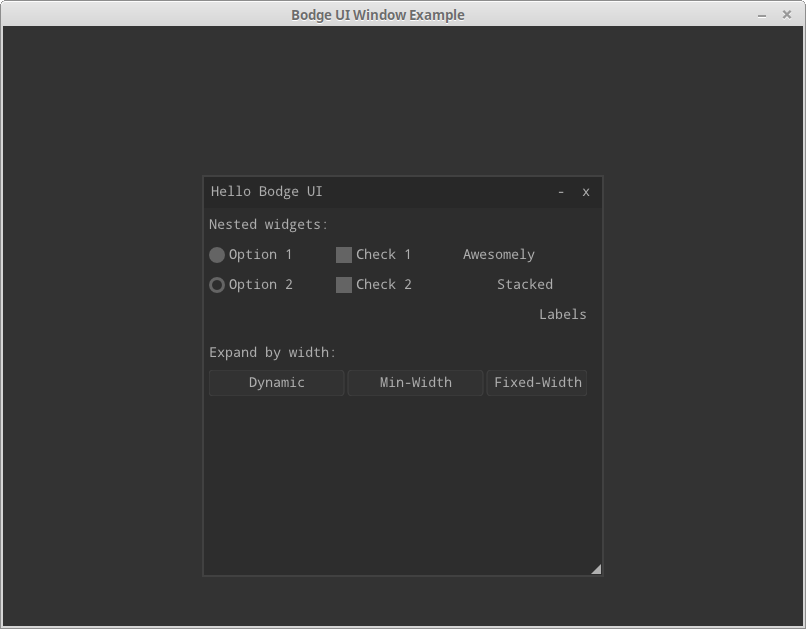 To react to events, use the following signals:

They take as argument a function with one argument, the panel. But beware: they will be called on each rendering cycle when the widget is on the given state, so potentially a lot of times.

If you ran the example in the REPL, you couldn’t see what’s cool. Put the code in a lisp file and run it, so than you get the window. Now you can change the panel widgets and the layout, and your changes will be immediately applied while the application is running!

Have fun, and don’t hesitate to share your experience and your apps.