You entered this new world of Lisp and now wonder: how can we debug what’s going on? How is it more interactive than other platforms? What does the interactive debugger bring, apart from stack traces?

Well of course we can use the famous technique of “print debugging”. Let’s just recap a few print functions.

print works, it prints a readable representation of its argument, which means what is printed can be read back in by the Lisp reader.

princ focuses on an aesthetic representation.

(format t "~a" …), with the aesthetic directive, prints a string (in t, the standard output stream) and returns nil, whereas format nil … doesn’t print anything and returns a string. With many format controls we can print several variables at once.

Logging is already a good evolution from print debugging ;)

log4cl is the popular, de-facto logging library but it isn’t the only one. Download it:

and let’s have a dummy variable:

We can use log4cl with its log nickname, then it is as simple to use as:

We can interleave strings and expressions, with or without format control strings:

With its companion library log4slime, we can interactively change the log level:

It is very handy, when we have a lot of output, to turn off the logging of functions or packages we know to work, and thus narrowing our search to the right area. We can even save this configuration and re-use it in another image, be it on another machine.

We can do all this through commands, keyboard shortcuts and also through a menu or mouse clicks. 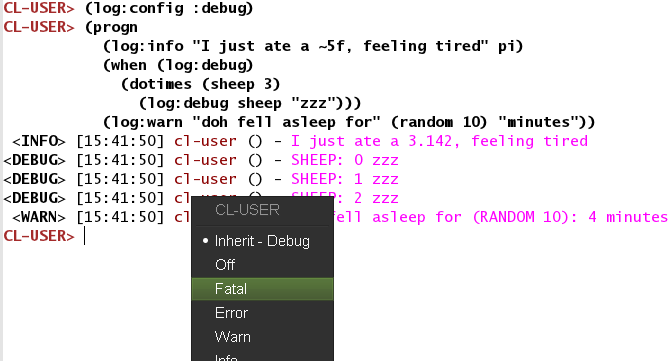 We invite you to read log4cl’s README.

Part of the joy of Lisp is the excellent REPL. Its existence usually delays the need to use other debugging tools, if it doesn’t annihilate them for the usual routine.

As soon as we define a function, we can try it in the REPL. In Slime, compile a function with C-c C-c (the whole buffer with C-c C-k), switch to the REPL with C-c C-z and try it. Eventually enter the package you are working on with (in-package :your-package) or C-c ~ (slime-sync-package-and-default-directory), (which will also change the default working directory to the package definition’s directory).

The feedback is immediate. There is no need to recompile everything, nor to restart any process, nor to create a main function and define command line arguments for use in the shell (which we can of course do later on when needed).

We usually need to create some data to test our function(s). This is a subsequent art of the REPL existence and it may be a new discipline for newcomers. A trick is to write the test data alongside your functions but below a #+nil feature test (or safer, +(or nil)) so that only you can manually compile them:

When you load this file, *test-data* won’t exist, but you can manually create it with C-c C-c.

All that being said, keep in mind to write unit tests when time comes ;)

These two commands share the same goal, printing a description of an object, inspect being the interactive one.

We can also, in editors that support it, right-click on any object in the REPL and inspect them. We are presented a screen where we can dive deep inside the data structure and even change it.

Let’s have a quick look with a more interesting structure, an object:

We right-click on the #<FOO object and choose “inspect”. We are presented an interactive pane (in Slime):

When we click or press enter on the line of slot A, we inspect it further:

Whenever an exceptional situation happens (see error handling), the interactive debugger pops up.

It presents the error message, available actions (restarts), and the backtrace. A few remarks:

Usually your compiler will optimize things out and this will reduce the amount of information available to the debugger. For example sometimes we can’t see intermediate variables of computations. We can change the optimization choices with:

and recompile our code. You can achieve the same with a handy shortcut: C-u C-c C-c: the form is compiled with maximum debug settings. You can on the contrary use a negative prefix argument (M--) to compile for speed. And use a numeric argument to set the setting to it (you should read the docstring of slime-compile-defun).

trace allows us to see when a function was called, what arguments it received, and the value it returned.

In Slime we also have the shortcut C-c M-t to trace or untrace a function.

If you don’t see recursive calls, that may be because of the compiler’s optimizations. Try this before defining the function to be traced:

The output is printed to *trace-output* (see the CLHS).

In Slime, we also have an interactive trace dialog with M-x slime-trace-dialog bound to C-c T.

In SBCL, we can use (trace foo :methods t) to trace the execution order of method combination (before, after, around methods). For example:

See the CLOS section for a tad more information.

step is an interactive command with similar scope than trace. This:

gives an interactive pane with the available restarts:

Stepping is useful, however it may be a sign that you need to simplify your function.

A call to break makes the program enter the debugger, from which we can inspect the call stack.

Look at the SLDB menu, it shows navigation keys and available actions. Of which:

Once we are in a frame and detect a suspicious behavior, we can even re-compile a function at runtime and resume the program execution from where it stopped (using the “step-continue” restart).

advise and watch are available in some implementations, like CCL (advise and watch) and LispWorks. They do exist in SBCL but are not exported. advise allows to modify a function without changing its source, or to do something before or after its execution, similar to CLOS method combination (before, after, around methods).

watch will signal a condition when a thread attempts to write to an object being watched. It can be coupled with the display of the watched objects in a GUI. For a certain class of bugs (someone is changing this value, but I don’t know who), this can be extremely helpful.

Last but not least, automatic testing of functions in isolation might be what you’re looking for! See the testing section and a list of test frameworks and libraries.

You can have your software running on a machine over the network, connect to it and debug it from home, from your development environment.

The steps involved are to start a Swank server on the remote machine (Swank is the backend companion of Slime), create an ssh tunnel and connect to the Swank server from our editor. Then we can browse and evaluate code on the running instance transparently.

To test this, let’s define a function that prints forever.

If needed, import the dependencies first:

On the server, we can run this code with

If you check with (bt:all-threads), you’ll see your Swank server running on port 4006, as well as the other thread ready to do stuff:

We do port forwarding on our development machine:

this will securely forward port 4006 on the server at example.com to our local computer’s port 4006 (Swank only accepts connections from localhost).

We connect to the running Swank with M-x slime-connect, choosing localhost for the host and port 4006.

We can write new code:

and eval it as usual with C-c C-c or M-x slime-eval-region for instance. The output should change.

That’s how Ron Garret debugged the Deep Space 1 spacecraft from the earth in 1999:

We were able to debug and fix a race condition that had not shown up during ground testing. (Debugging a program running on a $100M piece of hardware that is 100 million miles away is an interesting experience. Having a read-eval-print loop running on the spacecraft proved invaluable in finding and fixing the problem.